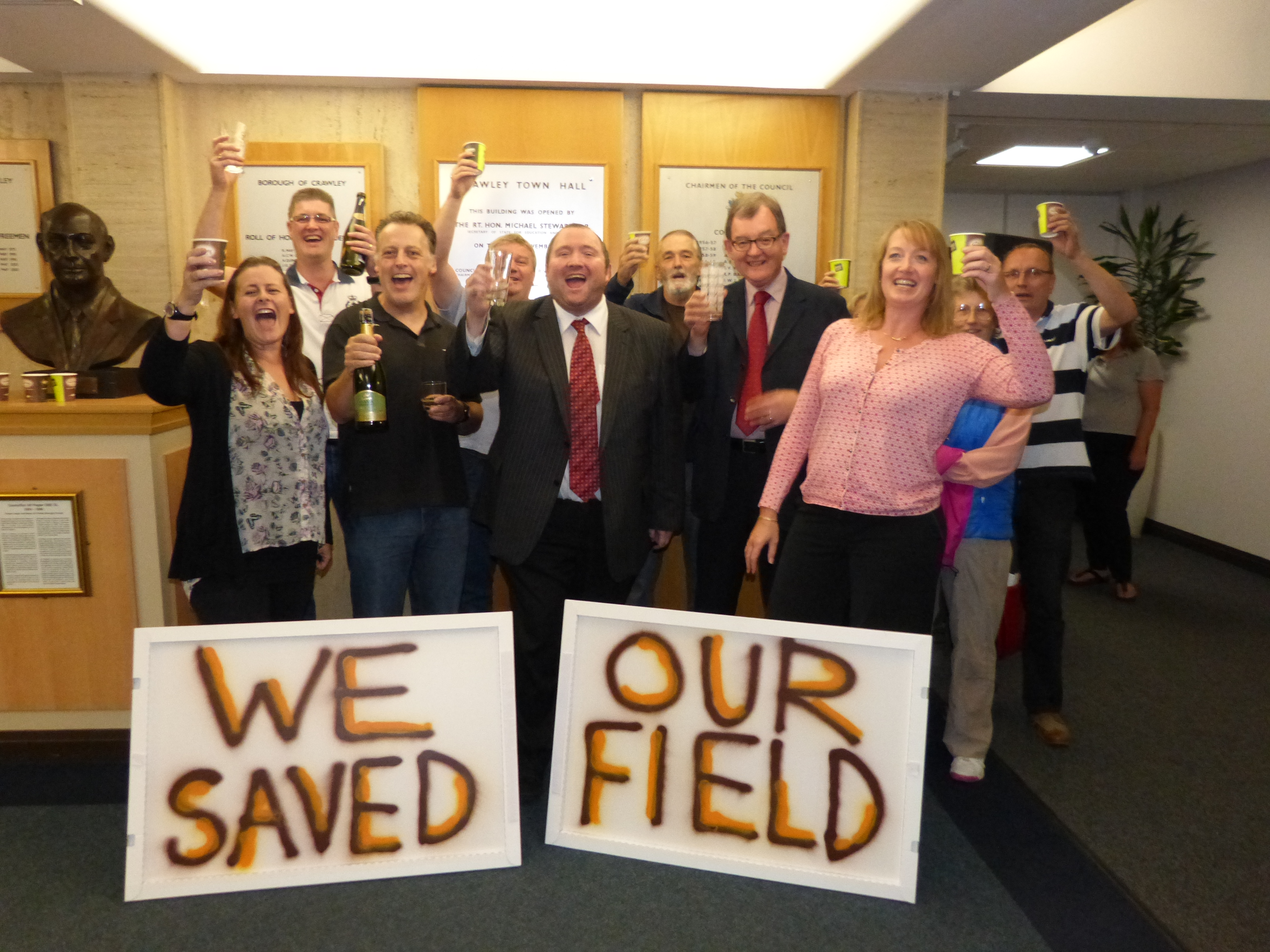 Senior councillors from Crawley Borough Council’s Cabinet have voted unanimously to withdraw the green space behind Ely Close from sale for housing development.

Tilgate residents applauded the decision as it was made and later celebrated the satisfactory resolution of a long-running campaign by toasting the decision with champagne.

Residents in Ely Close, Oxford Road, Winchester Road and Worcester Road have fought since 2011 against proposals to bring forward 18 housing units in the green space behind their homes, arguing that it was poorly placed, and Tilgate would lose a much valued area for leisure and recreation.

The proposals had been approved by the then Conservative Cabinet in March 2012, and pushed through in the face of public opposition, despite a petition by Tilgate residents being presented to the council at the same time.

Local Labour councillor for Tilgate Colin Lloyd had supported local residents’ opposition to the council’s proposals from the beginning.  The campaign culminated in a bid to make the land an Asset of Community Value, which halted for six months any legal sale of the land.

Wednesday’s meeting gave the new Cabinet a chance to reconsider the situation following Labour regaining control of the council after eight years in opposition.

Arguing for the field to be withdrawn from sale, and paying tribute to the determination of local residents, Cllr Lloyd (Lab, Tilgate) said: “What was always the case and is called for still tonight is a graceful acceptance by all parties that residents in this part of Tilgate wish to preserve the amenity value of the green space near Ely Close which has remained intact for the enjoyment of generations of residents since the 1950s. I go further and point out that the character of Crawley as we know it depends upon the preservation of similar green spaces in our neighbourhoods.

“We are all here as a result of the democratic process.  We are not simply administrators carrying out transactions in a public opinion free vacuum.  The previous Conservative cabinet proved unbending in the face of broad based calmly expressed and well argued public concern.  It falls to us to put things right and we should grasp the opportunity this reappraisal provides to do so.”

He was supported by fellow councillor Michael Jones (Lab, Bewbush), who rejected arguments from Conservative councillors at the meeting that the council would be losing money and risking “reputational damage” if it did not proceed with the sale to developers.

Cllr Jones said: “This should never have been brought forward by the previous Tory administration, not with this level of community opposition.

“There is a price to be paid for bad decisions.  We had a lot of the Tories selling off the family silver in their eight years in charge of this council, and this is another example.  Yes, if the Cabinet abandon the sale, the council would be forgoing the money from the sale.  Yet we would have lost a valued recreational area.

“I personally think the least the residents of Tilgate deserve is that we agree to save this part of their local environment, rather than be obsessed with the bottom line of the balance sheet.

“Given that there are over 2000 housing units earmarked for Forge Wood and other developments coming forward in the near future, many of them council or affordable, this I believe more than covers the 18 social units the development in Ely Close would have provided.”

The decision by the Cabinet means that the land will be retained for its current recreational use, and residents already have plans to make it an even more pleasant environment and place to enjoy, hoping to work in partnership with the council.