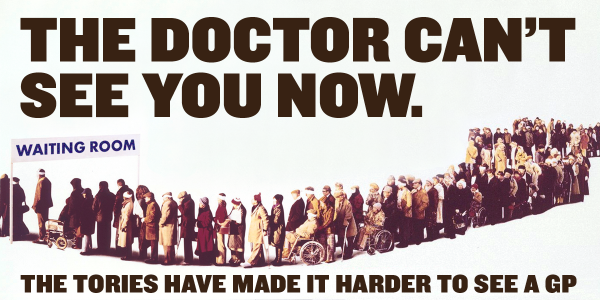 Some 600 fewer GP surgeries across England are open in the evening and at weekends compared to the time of the last election, new figures today show.

At the last election, David Cameron promised to open GP surgeries seven days a week but the reality is that millions more patients are unhappy with opening hours. It is now harder to get an appointment from Monday to Friday too.

One of Cameron’s first acts as Prime Minister was to cut Labour’s extended opening hours scheme and scrap our guarantee of an appointment within 48 hours. If David Cameron gets back in, his extreme spending cuts mean he can’t protect the NHS – and the queues outside GP surgeries will get even worse.

The NHS needs Labour’s better plan for 8,000 more GPs, paid for with a £2.5 billion a year Time to Care fund, and guaranteed appointments within 48 hours.