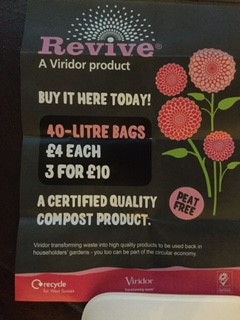 In recent years, residents of West Sussex have been able to buy ‘soil conditioner/compost’ from the Household Waste Recycling Sites -; including the one in Crawley. Last year, three 40 litre bags were sold for £10. The sites are managed by Viridor on behalf of West Sussex County Council.

This demonstrated to residents what happened to the green waste that was collected from District and Borough Green bin collection services and green waste deposited at the Recycling Sites. It was described as a ‘closed circle’ -; or as I prefer to describe it -; a ‘virtuous cycle’ whereby (what used to be described as) ‘waste’ or ‘garden rubbish’ disposed of by residents was turned into a peat-free product that could be used to improve soil quality in residents’ gardens for a reasonable/competitive price. Such a system was clearly ‘sustainable’ given the ready availability of garden rubbish year on year and meant that such waste did not have to be put into landfill or incinerated. For that matter, peat which took millennia to form in Britain or abroad did not have to be excavated and transported hundreds of miles to be sold as the main component in compost to Sussex residents.

Up until 2015 the sale of soil conditioner sacks was (commendably in my view) subsidised by West Sussex County Council to make the cost to the public comparable with other (I would argue unsustainable peat-based) compost on sale at garden centres and DIY outlets.

Due to what were called ‘financial pressures’, the council decided that it could no longer subsidise the product and asked Viridor if there was a way to sell the soil conditioner without the subsidy.

In 2016 Viridor suggested that to save costs they could source soil conditioner from a new bagging plant at their site in Somerset. However the product would not be directly sourced from WSCC waste. The ‘virtuous cycle’ was thus broken. So the product would be available but at the price of transporting it at least a hundred miles in lorries pumping out exhaust fumes adding to air pollution (with its now acknowledged effects on human health) and global warming -; and clogging up the motorways.  WSCC agreed to this as a short term option and last year continued to sell the sacks at 3 for £10.

WSCC claim that 2016 was a year of falling sales and increased costs though no explanation is offered. WSCC claim that for Viridor to sell the Soil Conditioner in 2017 they would have had to raise the price to the public considerably, to in the region of £6 per bag.

WSCC claim that it is not in a position to subsidise these sales though again a justification is not offered. It suggests that supermarkets such as Lidl are selling ‘proper’ (ie peat-based) compost cheaper.

WSCC now also assert that ‘It is very regrettable that this Soil Conditioner is no longer available, but unfortunately as it is no longer financially viable, we have had to cease the sales.’

So what I call the ‘virtuous circle’ has been broken because peat-based compost is ‘cheaper’ even though its extraction from the natural environment and its long distance  transportation clearly has negative environmental implications.

I would argue that the Viridor product is the sustainable option compared to supermarkets’ ‘cheaper’ but unsustainable alternative.

It would appear that WSCC value the sale of unsustainable peat-based compost to ‘make our gardens grow’ more than the encouragement of a sustainable alternative.

‘Environmentalists, the government, and gardening organisations all agree that the use of peat should be phased out and replaced by sustainable and if possible, locally sourced alternatives..

You might think of peatbogs as dull expanses of empty, waterlogged land, but if you wandered into the heart of the Mosses National Nature Reserve on the Welsh border you’d find a unique and beautiful range of plant, insect and bird life that depends on the layers of peat that make up this lowland raised bog. Many gardeners don’t realise that multi-purpose compost, unless it’s labelled ‘peat free’, contains between about 70 per cent and 100 per cent peat.’

For the sake of the environment and future generations, I would urge residents to write to their county councillor to ask them to restore ‘choice’ by reintroducing Viridor soil conditioner/compost for sale at its Household Waste and Recycling Sites.